Does Seattle Have A Haunted Coke Vending Machine? 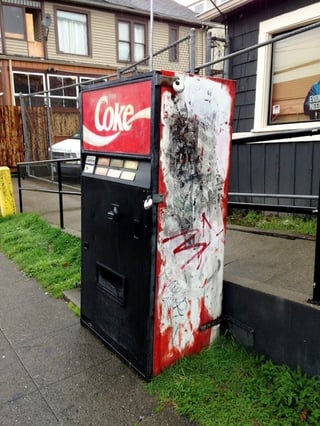 Halloween may have passed, but there are still some spooky things out there. Like a Coke vending machine in Seattle that is reportedly haunted.

The machine is a 1970's era piece of equipment. It's dingy and dented, as you might expect, and the product labels are faded. But, so what? There are many vending machines out there that can be described as such. Yes, there are.

It has a 'mystery' selection that seems to vend random flavors. Flavors not among the others prominently listed next to it. As one user stated, "Upon recently bestowing the machine with three dollars, I received a Mountain Dew White Out, a raspberry-flavored Nestea Brisk, a Hawaiian Punch, and a Grape Fanta."

The real kicker, though? No one is ever seen stocking the Coke machine, yet it never goes empty.

It's eerily reminiscent of Stephen King's possessed washing machine in his story The Mangler.